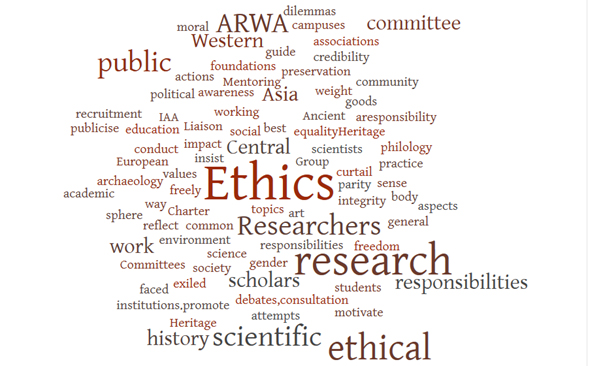 Project of the “Ethics” Liaison Group

The aim of the Ethics liaison group is to provide a best practice guide to scholars working on Western and Central Asia (ARWA), inviting them to reflect on the values that motivate our actions and their consequences. Such a guide calls on our moral sense and that of our responsibility.

Role of the Ethics Liaison Group

A liaison group on Ethics should ideally be an independent body reflecting on the ethical aspects of research on Ancient Western and Central Asia. In order to carry real weight in ethical debates, it should work on the one hand as a consultation body for the various associations and for their members working in this region of the world, starting with ARWA and IAA, and on the other hand as a means of relaying the concerns of the scientific community to the political sphere and the general public. For these aspects, it should work closely with the ARWA Heritage and Mentoring liaison group.

In the area covered by ARWA, several countries in which scholars work endure permanent violence, war, civil war, terror imposed by armed groups, government violations of human rights, dictatorship, and censorship. This calls to the freedom and responsibilities in academic research as well as issues of safety and solidarity: how to conduct research in such countries, how to collaborate freely with local colleagues without putting them in danger, how to deal with political and diplomatic relationships and situations, how to navigate governments rewriting their history or using cultural heritage for political, religious or economic agendas?

Political instability and economic disparity in conflict zones exacerbates looting of sites and illicit trafficking, feeding the antiquities market with unprovenanced ancient artefacts. Researchers are committed to reflecting on how to deal with such unprovenanced objects, with private collectors and antique dealers eager to authenticate these artefacts, with other colleagues who authenticate them, with publications that include unprovenanced artefacts, etc. One of the aims of the Ethics liaison group is to guide researchers in ethical and responsible practices in these types of situations. As for artefacts regularly excavated, the Ethics liaison group should also encourage researchers to publish discoveries within a reasonable period of time in order to give the scientific community and the public access to data with the aim of advancing knowledge.

The Ethics liaison group also has a role to play in relation to scientific institutions. It can, for example, promote ethics in recruitment, insist on gender parity, social equality and, together with the Heritage liaison group, raise awareness on cases of exiled students and scientists and attempts to curtail academic freedom on campuses and in research institutions.

The Ethics liaison group is also concerned about the management of data in terms of transparency in data processing, the tracking of data, the respect of intellectual property rights, and open data. It also endorses data and documentation sharing with the competent authorities in the ARWA countries where ARWA affiliates work.

Ethics in archaeology, art history, history, philology, etc. should be part of the education of students and the Ethics liaison group could develop contents for education together with the mentoring liaison group and outreach material to raise public awareness.